Very high
Connect Four is a tabletop game created by Milton Bradley and Hasbro in which two players take alternating turns placing a checker into a vertically-suspended grid. The first player to connect four of their checkers vertically, horizontally, or diagonally wins. The game's cover art has been parodied online in the mid-2010s.

Before Connect Four, versions of the game existed by other names, including Captain's Mistress and Four-in-a-row. It is unclear when these versions originated. Hasbro/Milton Bradley's version of Connect Four began selling in February of 1974. Variations on the game include Five-in-a-row, played on a larger grid, and Power Up, in which a player has a "super-powered" checker that can be played once per game. Hasbro has also created a large version of the Connect Four board for outdoor play.

A popular meme related to the game involves photoshopping the game's box cover art to make a more absurd game. One of the most popular images features the box photoshopped to read "Connect One." One of the earliest known posts to feature the image was posted on Hahastop on December 3rd, 2007.

In the ensuing years, several other variations on the cover art appeared. In August of 2009, Buzzfeed posted an image of a "Connect Fuhrer" photoshop, in which the boy on the box was given a Hitler mustache and hairstyle. In March of 2016, a "Connect Flour" photoshop was posted to /r/funny. 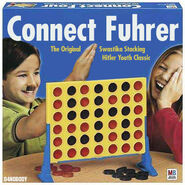 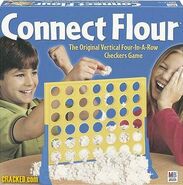 In August of 2017, a Connect One video game was posted to Steam as a free add-on to Tabletop Simulator. On January 9th, 2018, a collage of Connect Four cover art parodies was posted to /r/memeeconomy, gaining over 800 upvotes.

Draw the Squad is a fanart trend that involves drawing images with multiple characters in flamboyant, outrageous poses or precarious situations. The trend is usually started with a photograph of people posed uniquely, with the suggestion to artists to replicate with their own choice of characters, either from their OCs or their preferred fandoms. Many of the images in the meme involve characters playing Connect Four.