High
"Johny Johny Yes Papa", sometimes spelled "Johnny Johnny Yes Papa", is a nursery rhyme about a young boy who is confronted by his parent for eating sugar without permission. On YouTube, the song is often featured in "amateur quality" animated music videos.

On July 9th, 2009, the Shemrock Nursery Rhymes YouTube channel uploaded an animated video of a young boy who is scolded for eating sugar, featuring the rhyme sung to the tune of the children's song "Twinkle Twinkle, Little Star" playing in the background. In the first six years, the video garnered over 2.9 million views.


Eating sugar?
No Papa,
Telling a lie?
No Papa,
Open your mouth,

On June 12th, 2012, the Turtle Interactive YouTube channel posted an animation in which a father (who strongly resembles Peter Griffin from Family Guy) confronts his child in the kitchen while singing the rhyme. Within three years, the video accumulated upwards of 7.4 million views. On August 2nd, 2013, the ChuChuTV YouTube channel uploaded an animated video featuring the nursery rhyme, which gathered more than 70 million views and 3,400 comments within two years.

On June 1st, 2014, a thread about the animation was created on the /co/ (comics and cartoons) board on 4chan,receiving over 197 replies prior to being archived. On June 3rd, the r/johnnyjohnnyyespapa subreddit was launched for parodies of the nursery rhyme animations.

On June 11th, a post asking about the popularity of the nursery rhyme was submitted to the /r/OutOfTheLoop subreddit. On November 14th, the ChuChuTV channel uploaded an updated version of the animation, which received upwards of 282 million views, 190,700 likes and 128,000 dislikes over the next year. On October 9th, 2014, YouTuber EdukayFUN uploaded a poorly rendered 3D animation featuring the song, in which a father figure is angered when he catches his son eating sugar, silverware and pigs. Within seven months, the video accumulated more than 1.7 million views and 760 comments. On January 29th, 2015, YouTuber super hero kids rhymes uploaded another 3D animation featuring the superhero The Incredible Hulk singing the rhyme to a green child. Within five months, the video gained over 2.3 million views.

On August 18th, 2018, Twitter user @b6ner posted a clip from YouTuber BillionSurpriseToys, which combined "Johny Johny Yes Papa" with the "Baby Shark" song. They captioned the tweet, "i'm losing my fucking mind." The post received more than 113,000 retweets and 270,000 likes in six days. The video has since been removed due to a copyright complaint.

The popularity of the tweet inspired a series of memes using the characters from the video. 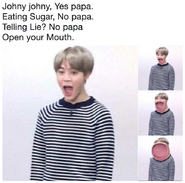 On August 23rd, Facebook user vautrin.desnoyers posted a variation in the Simpsons Shitposting Facebook group. The post received more than 875 reactions, 140 shares and 100 comments in 24 hours.

On August 29th, YouTuber Cyranek tweeted a dubbed version of the video with the 1991 song "Killing in the Name" by Rage Against the Machine playing in the background.

On August 30th, 2018, Twitter user @Slazo tweeted a screenshot of a DMCA takedown notice for one of his Johny Johny videos, followed by a message that the email contained a "huge list of other tweets and Twitter accounts they reported". Meanwhile, the @YesPapaNoSugar novelty account was removed from the site for unknown reasons.