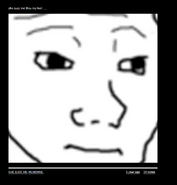 On September 9th, 2015, YouTuber CasinoCowboyProductions uploaded a reading of "He Will Never Have a Girlfriend" parody comic ending with an image of Spongebob Squarepants saying "she succ me". On October 16th, YouTuber Pustules TV uploaded footage of Gordon Hurd laughing and saying "you will never get the succ".

On October 26th, YouTuber FilthyFrank uploaded a video in which an alien doll says "give me the succ" while receiving a lap dance from a stripper. Over the next year, the video, titled "E. T. 2", gathered upwards of 5.3 million views and 26,000 comments.

On April 22nd, 2016, an anonymous 4chan user posted a thread featuring an image of "Spongebob Squarepants": with the caption "she succ me" accompanied by a greentext story about receiving oral sex while thinking of the picture. That day, a screenshot of the thread was submitted to the subreddit /r/4chan, where it accumulated upwards of 2,600 votes (95% upvoted) prior to being archived.

On September 14th, 2016, the Behind The Meme YouTube channel uploaded an episode on the meaning of the term, which received more than 69,000 views and 590 comments within one month.

Layers Of Irony refers to an exploitable four-panel web comic of a floating head, also known as Meme Man, having a conversation with another character, in which they refer to “layers of irony” as a form of enlightenment.

On February 25th, 2016, YouTuber JeZ uploaded a reading of the comic titled "Succ," which garnered upwards of 780,000 views and 1,900 comments over the next eight months. On April 19th, YouTuber Tugumi uploaded a video titled "Succ.mov," in which he plays a clip of the echoin "succ" audio from JeZ's video in a classroom.

On May 27th, 2016, the Facebook page "Fucc the Zucc" was launched, featuring image macros and photoshopped pictures of Mark Zuckerberg. On June 6th, the Facebook Page "Utopian Raspberry – Modern Oasis Machine" posted a photoshopped image of Zuckerberg dancing captioned with the word "Zucc". On June 27th, the Difficulty II Facebook page posted a Layers of Irony parody comic in which Mark Zuckerberg says "Zucc" to the Goose on Fire. 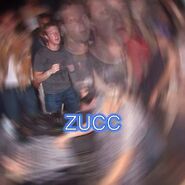 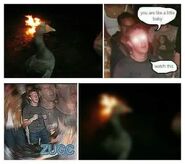 On August 10th, Urban Dictionary user NicholsSA submitted an entry for "zucc'd," an alternate spelling of the word "zucked" which gained popularity during Facebook's crackdown on Weird Facebook pages.

On October 10th, 2016, YouTuber punpun uploaded part of a Mark Zuckerberg Facebook Live stream in which he asks commenters to explain the "zucc thing". That day, the video, titled "Mark doesn't get the ZUCC", reached the front page of the /r/youtubehaiku subreddit.