High
The T-pose, otherwise known as a Reference Pose, is a default unanimated state of some models in 3D graphics. It became popularly used with 3D-animated characters in deep fried and shitpost memes in the late 2010s.

References to and images of the T-pose have been commonly posted online for over a decade. One of the earliest known images to demonstrate the T-pose appeared on Flickr on January 17th, 2006.

However, the post did not become a meme until over a decade later when it began seeing use in deep fried and shitposting memes. One of the earliest known examples of the T-pose being used with an animated character was with the character Hugh Neutron in a Wuss Poppin' Jimbo meme posted November 16th, 2016 (shown below).

In the course of the following eighteen months, the T-pose became a commonly used reference in deep fried shitposts. For example, On July 14th, 2017, a post to /r/DeepFriedMemes featuring Brian Griffin from Family Guy in the pose gained over 3,400 points (shown below, left). Another post to the subreddit featuring Hugh Neutron posted June 26th, 2017 gained over 930 points (shown below, middle). 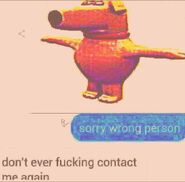 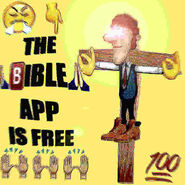 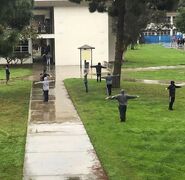 The T-pose also was a notable joke in the Super Smash Brothers community because of a glitch in the WiiU game in the series that had characters do the T-pose on the results screen. On April 20th, 2017, YouTuber Master0fHyrule posted a video compiling characters performing the T-pose glitch, gaining over 73,000 views.

On May 7th, 2018, Twitter user @SaxonNEET tweeted the message "T-pose is officially a hate symbol," followed by a picture of several teens performing the pose, captioned with the message "Europa shall rise".

On May 10th, an article titled "The Racist Origin of the 'T-Pose' & Why It Needs to be Stopped" was published on Medium. Meanwhile, Twitter user @MoonMan__88 tweeted a photograph of Ku Klux Klan members holding their arms outstretched along with the caption "whoa this T-pose meme has gone too far #tpose" (shown below, left). The following day, the contents of the article was submitted in a post to /r/copypasta. Also on May 11th, Twitter user @Melissa_Stuart1 tweeted one of the top fotographs of /r/TposeMemes, along with other several photos of young men performing the pose captioned with the hashtags "#tpose" and "#ItsOkayToBeWhite" (shown below, middle). 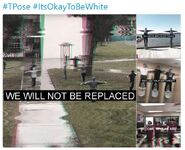