Average
Thank You Kanye, Very Cool! refers to a tweet submitted by 45th President of the United States Donald Trump in response to a tweet posted by Kanye West in late April 2018.

On April 26th, 2018, Redditor garrett0803 submitted a photoshop of the Twitter exchange in which West presents a stick figure illustration of himself holding hands with Trump to /r/me_irl (shown below, left). That day, the image was reposted to /r/dankmemes. Meanwhile, Twitter user @Seinfeld2000 posted an edit of the tweet in which West claims he is making an "x rated" sequel of the Bee Movie (shown below, middle). 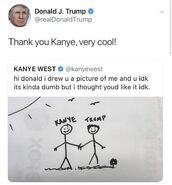