I Wish I Was At Home (Playing Videogames) is an exploitable comic series featuring Wojak, in which the subject is depicted as anxious and uncomfortable at parties and other social situations.

Smug Wojak refers to a drawing of a bald man with a smug expression on his face that resembles Wojak, inspired by the Smug Frog images. Appearing on /r9k/ and [s4s] in early August 2014, Smug Wojak is normally used to express positive feelings. It also spawned some derivatives, listed on the [s4s] wiki. 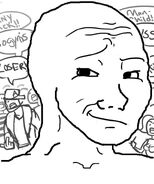 Relation with Pepe the Frog[]

Wojak has been often related with the character Pepe the Frog, mainly with the Sad Frog variant due their expression of sad emotions. In middle November 2014, Wojak started being paired with Smug Frog on a series of comics named Poo Poo Pee Pee, in which Pepe committs various unethical acts towards Wojak, typically involving urine or feces, and created as a reaction towards the usage of Pepe’s likeness in various mainstream social media sites.